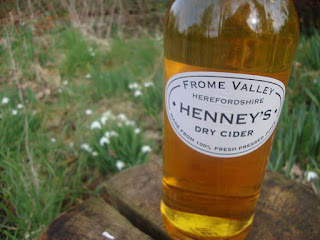 Time for the monthly round up and a look at what has been happening at Henney's during February.

Despite the prediction of racking and blending this month (some proper cider making stuff) I still don't have much to report on that front. March now, apparently.

But bottling has stepped up a gear this month. With Spring just around the corner and Easter at the end of the month sales are expected to pick up so Mike has increased his bottled stock-holding, ready to fulfill orders.

Quite a few more sales meeting this month so Mike was away a fair amount - overalls off, suit on, bottles clanking in his briefcase. And while he was busy drumming up trade, I tried out a couple of new cider recipes: a chicken casserole cooked in cider, and quirky version of pancakes for Shrove Tuesday - made with cider instead of milk, and served with caramelised apples. Highly recommended.

But the big news this month is here at Tree Farm, where work has begun on establishing the new cider apple orchard. I will cover this in depth in another post, but in summary, 120 traditional cider apple trees have now been planted, thus transforming our empty fields into an infant orchard. Exciting times... 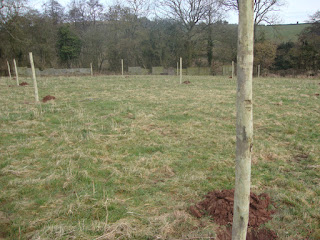 All staked out and ready for planting 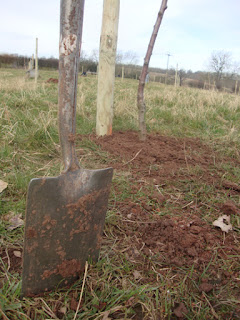